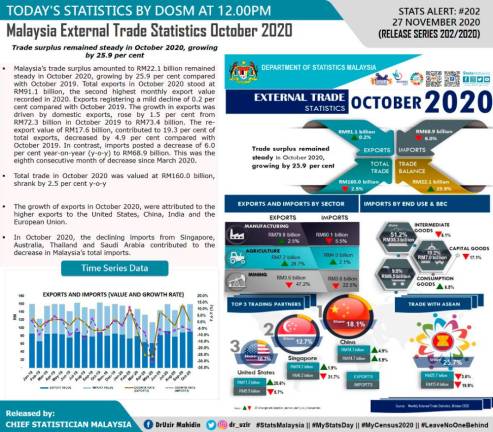 Malaysia’s export in October 2020 stood at RM91.1 billion, a marginal year-on-year (yoy) increase of 0.2%, marking the second highest monthly export value recorded for this year, according to the Statistics Department.

In contrast, imports saw a 6% decline yoy to RM68.9 billion, marking the eight consecutive month of decline since March this year.

“Meanwhile, Malaysia’s trade surplus amounted to RM22.1 billion remained steady in October 2020, growing by 25.9% compared with October 2019,” he said in a statement today.

The expansion in exports reported for the month was contributed by a higher exports to the US (RM2.3 billion), China (RM664.6 million), India (RM471.3 million and the European Union (RM348.0 million).

On the flip side, it reported a decline of imports from Singapore (RM2.9 billion), Australia (RM1.4 billion), Thailand (RM431.4 million) and Saudi Arabia (RM427.6 million) which contributed to the decrease in total imports.

The department revealed that the main products that contributed to the increase in exports were rubber products (RM2.9 billion); palm oil-based agriculture products (RM1.7 billion) and electrical and electronic (E&E) products (RM1.1 billion).

Imports by end use registered a decline for intermediate goods and capital goods, which came at RM35.3 billion and RM7 billion, a drop of 6.1% and 17.1% respectively.

On the other hand, imports of consumption goods increased by 6.5% from RM6.1 billion to RM6.5 billion.