Malaysia’s daily number of administered Covid-19 vaccine doses topped 500,000 for the first time yesterday (July 22) at 507,050, compared with 446,052 the day before, according to the latest updates on Twitter today by the country’s Special Committee for Ensuring Access to Covid-19 Vaccine Supply (JKJAV), citing data from the Covid-19 Immunisation Task Force (CITF).

The CITF said the country’s total number of administered Covid-19 vaccine doses had passed the 16 million mark at 16.02 million. 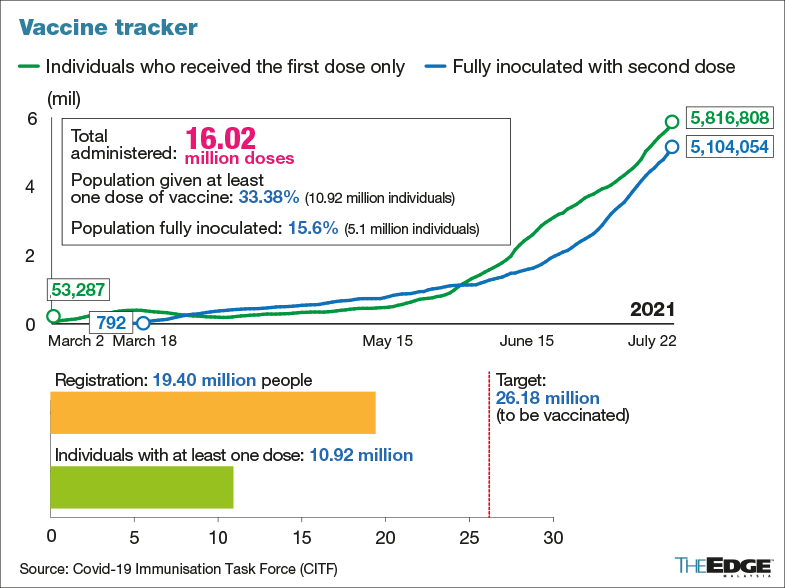 Among the states and federal territories, Selangor reported the highest daily number of first doses administered at 95,278, followed by Kuala Lumpur’s 56,524 jabs, according to the CITF.

For second doses, Sarawak delivered the highest daily number of jabs at 43,363, followed by Selangor’s 35,944 shots, the CITF added.

Cumulatively, the CITF said the country’s total number of administered Covid-19 vaccine doses so far reached 16.02 million yesterday, from 15.52 million the day before, comprising 10.92 million first doses for 33.4% of Malaysia’s total population and 5.1 million second doses for 15.6% of the population. 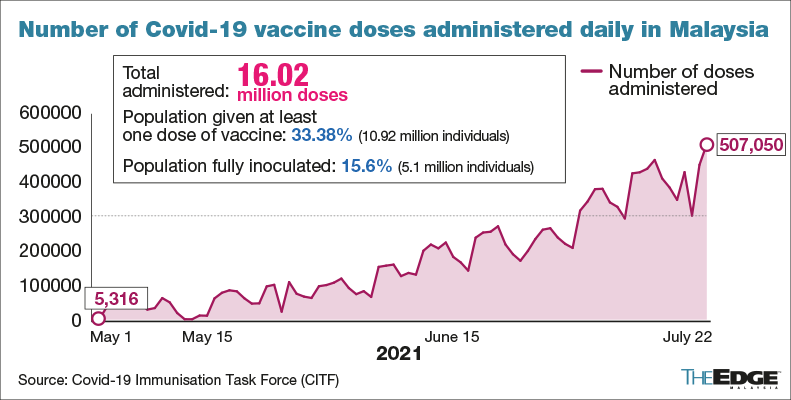 According to the CITF, collectively in the Klang Valley — comprising Kuala Lumpur, Putrajaya and Selangor — as of yesterday, the total amounts of administered first and second doses stood at 4.43 million and 1.47 million respectively.

Elsewhere, the total number of administered first doses was the highest in Sarawak at 1.62 million, followed by Johor at 789,971, according to the task force.

For second doses, Sarawak also recorded the highest cumulative number at 1.05 million, followed by Johor at 390,960, the CITF added. 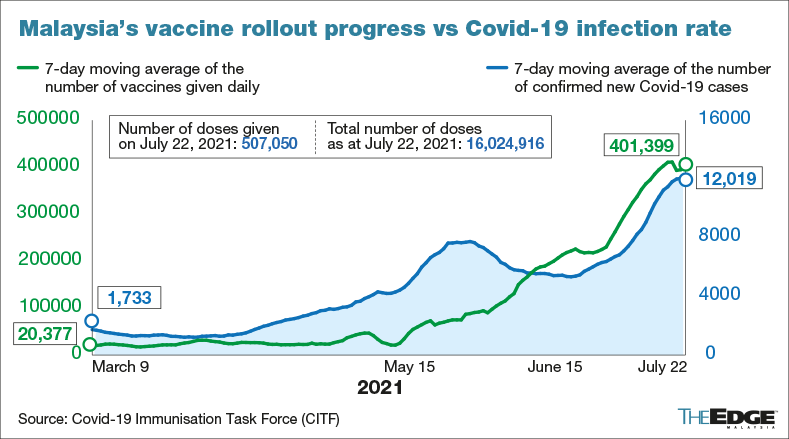 Based on the government’s target of having 80% of the population fully vaccinated against Covid-19 to achieve herd immunity, the country will need to have about 26 million people completing their two-dose vaccination.

News reports in June, quoting National Covid-19 Immunisation Programme Coordinating Minister Khairy Jamaluddin, said that the government is targeting to administer by December about 52 million vaccine doses to around 26 million people, accounting for the target of some 80% of the population.

The number of vaccine doses to be administered from June to August is reportedly expected to more than double from 5.8 million to 14.4 million amid expectations of faster vaccine deliveries from suppliers.