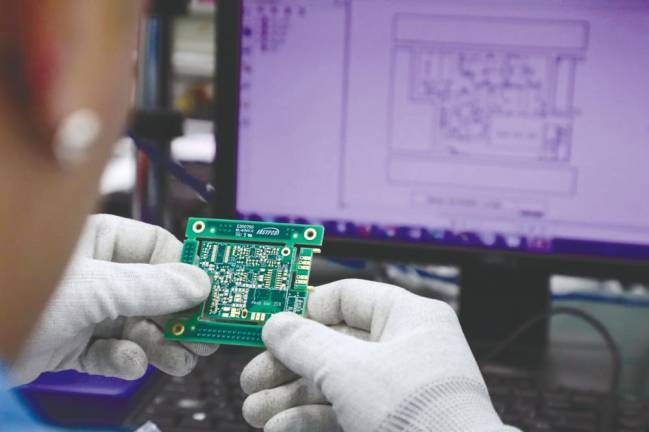 The main contributors to the export expansion in June were electrical and electronic products. – REUTERSPIX

Malaysia’s export performance in June indicated a recovery from the COVID – 19 pandemic, turning in an 8.8% increase in value to RM82.9 billion, from a 25.5% decline in May 2020, Chief Statistician Malaysia Datuk Seri Mohd Uzir Mahidin.

The latest figures showed that re-exports increased by 5.3% year on year to RM12.9 billion, accounting for 15.5% of total exports, while domestic exports jumped 9.5% to RM70 billion.

“In contrast, imports were valued at RM62 billion, declined by 5.6% year on year, resulting in a trade surplus of RM20.9 billion, 98.7% wider compared with June 2019. This was the largest trade surplus ever recorded thus far,” he said in a statement.

The Statistics Department highlighted that the export expansion was attributed to higher exports to China (RM4.7 billion), the United States (RM2.1 billion) and Hong Kong (RM1.4 billion). However, exports to India declined by RM1.4 billion.

The International Trade and Industry Ministry attributed the improved performance overall to the gradual lifting of restrictions imposed because of Covid-19 in Malaysia and globally.

It highlighted that Malaysia’s trade with China rebounded 22% year on year to RM26.68 billion in June, accounting for 19.8% of Malaysia’s total trade as exports expanded for three consecutive months registering a 46.8% increase to RM14.78 billion, led by higher exports of iron and steel products, manufactures of metal, petroleum products, palm oil and palm oil-based agriculture products, other manufactures (SSD), optical and scientific equipment as well as E&E products.

In the first half of the year, total trade was recorded at RM833.36 billion, a 7% decline from the same half of the previous year. Exports during the period totalled RM448.99 billion, a decline of 6.8% and imports was valued at RM384.38 billion, decreasing by 7.2%. A trade surplus of RM64.61 billion was recorded for the period, slipping by 4.1%.

In a note, UOB Research said Malaysia’s June export performance leads the region, which can be attributed to a diversified export base, easing of supply chain disruptions, resumption of production to fulfil backlog of orders, and release of pent-up demand.

“The stronger-than-expected exports augur well for June’s manufacturing production and infers a narrower 2Q’20 GDP decline. Our current estimate for 2Q20 GDP is -12% year on year but may be subjected to revisions upon release of June’s industrial production, and wholesale and retail trade data,” it said.

However, it cautioned that the pace and strength of recovery in second-half 2020 will depend on sustainability of production and demand, as there are lingering risks amid signs of a new wave of Covid-19 infections across the region.

“The higher base effect in 2H20 would also infer a moderation and uneven growth trend over the coming months. Meanwhile Malaysia’s diversified export base and potential new demand from reorientation of supply chains should remain supportive. As such we are revising our full-year exports to reflect a narrower decline of 3.5% in 2020,” it said.