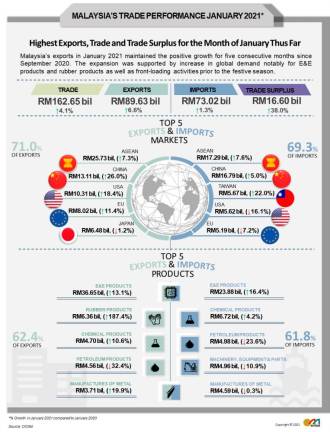 Malaysia’s export rose 6.6% year-on-year (yoy) to RM89.63 billion in January 2021, the highest for the month of January thus far, while this also marks the fifth consecutive month of positive growth, according to Malaysia External Trade Development Corp (Matrade).

It noted that the expansion was supported by increase in global demand notably for electrical and electronic (E&E) and rubber products as well as front-loading activities prior to the festive season.

Higher exports were seen to China, the US, Vietnam, Singapore and Hong Kong.

Meanwhile, the agency stated that imports for the month grew 1.3% yoy to RM73.02.

On the whole, total trade rose 4.1% to RM162.65 billion, the highest value registered for the month of January. Consequently, Malaysia’s trade surplus surged by 38% to RM16.6 billion, sustaining a double-digit growth for eight consecutive months.

The agency highlighted that the export of manufactured goods contributed to 88.5% of total exports, translating to an 11.7% yoy growth to RM79.36 billion, supported by higher export of E&E products notably in automotive industry, 5G network and smart devices.

On the other hand, the exports of rubber products, especially rubber gloves which showed resilient performance, registering triple-digit growth for five consecutive months.

It also reported an increased export for the manufactures of metal, chemicals and chemical products as well as optical and scientific equipment.

On a month-on-month (mom) basis, Martrade listed that exports of manufactured, agriculture and mining goods declined by 3.2%, 40.2% and 1.8%, respectively.

For the month, Malaysia trade with Asean constituted 26.5% of its total trade, which translated to a 7.4% growth yoy to RM43.03 billion as exports grew for two straight months. January saw a 7.3% growth yoy to RM25.73 billion buoyed by higher exports of E&E products, while imports from Asean picked up by 7.6% to RM17.29 billion.

The increase is attributed to higher exports of e&e products, iron and steel products as well as other manufactures especially solid-state storage devices (SSD), while imports from China expanded by 5% to RM16.79 billion.

On the other hand, the country’s total imports grew 1.3% yoy to RM73.02 billion in January 2021 with the three main categories of imports by end use accounted for 72.8% of the total.